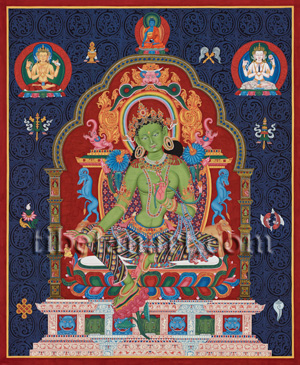 This composition is based upon the famous late 13th century thangka painting of Green Tara in the Cleveland Museum of Art in Ohio, which some art historians now attribute to the work of a brilliant Newar artist named Arniko. At the age of seventeen Arniko brought a group of about eighty Newar artists from Nepal into Tibet to work for the Sakya master Phagpa - the teacher of Kublai Khan, the Mongolian Emperor of China, who later became Arniko's lifelong patron. In this modern copy by Sukha Raj, only the central section of the 'Cleveland Green Tara's' ornate torana or backrest is depicted, whereas the original thangka includes a complex outer torana that takes the form of a temple amidst a sacred grove of trees.

Green Tara sits in her traditional posture of royal-ease upon a white moon disc, which rests upon a multicoloured double-lotus above an 'elephant-lion' (gaja-simha) throne. The façade panels of this throne display the stylized heads of four blue lions and three green elephants, with the stem of a lotus arising beneath the central panel to serve as a footrest for Tara's lowered right foot. The eight pillars of the throne's façade are decorated with traditional offering-goddess and elephant-lion motifs. And her throne's upper plinth is decorated with roundels containing small deer, geese and swan motifs; while the lower steps of her throne are ornamented with scrolling roundels of lotuses, leaves, petals, pearls, jewels and elephants.

Two ornate pillars ascend from either side of her throne, which contain vignettes of the eight aspects of Tara as the liberator from the 'Eight Great Fears'. These are the fears of: fire (anger); drowning (attachment); lions (pride); elephants (ignorance); imprisonment (greed); snakes (jealousy); demons (doubt), and thieves (false views). Ascending from the capitals of the pillars is a cinquefoil arch decorated with pearls and chequered motifs. The red area inside this arch and its pillars defines the shape of Tara's outer aura, with a 'six-fold enlightenment throne' surrounding the patterned backrest that defines her inner aura. Two elephants guard the bottom of her backrest, with mythical blue creatures known as 'sharabhas' standing upon their backs. The horns of each sharabha support the ends of a jeweled crest-bar, upon which squat two fierce makaras or 'water-monsters' with fabulously scrolling tails, and above them is the crowning serpent-devouring head of Chepu or kirtimukha. Tara's halo is horseshoe-shaped and coloured like a rainbow.

Tara has large round breasts, a narrow waist, and a sweetly smiling face with two bow-shaped eyes. Her long black hair is bound-up into a bun behind her left shoulder, with curling strands hanging freely behind her right shoulder and back. She is adorned with all manner of jeweled ornaments, many of which are fashioned from white pearls. These include her large cylindrical earrings, an ornate five-jewel crown, a variety of bracelets, armlets, anklets and short necklaces, shoulder ornaments, an elaborate jeweled belt, and a garland composed of pearls and jewels. Her lower garment or trousers are fashioned from stripes of multicoloured silk ornamented with diamond and zigzag designs, with alternating roundels that contain small images of geese and swans. Silk pleats hang from the sides and front of her belt, and a diaphanous and transparent floral scarf is draped over her thighs and left forearm.

With the outstretched palm of her right hand Tara makes the combined gesture of supreme generosity and protection, while beneath her palm sits a devotee wearing a yellow garment. With her left hand held in front of her heart she makes the protective gesture of giving refuge, with the tips of her thumb and third finger touching to form a circle, and her other three fingers extended to represent the 'Three Jewels'. The curved stem of a lotus arcs gently above the diamond-shaped lines on her palm, before curving upwards to terminate in a stylized leaf, bud, and a fully opened blue lotus. This lotus blossoms into many petals at the level of her left shoulder, with a similar blue lotus ascending from behind her hip to blossom at her right shoulder.

The background area of this painting is decorated with an overall pattern of swirling blue roundels, where the 'Eight Auspicious Symbols' and the 'Three Jewels' are depicted. Clockwise from the bottom left corner these eight Newar Buddhist symbols are: the eternal knot, the lotus, the victory banner, the golden vase, the two flywhisks, the parasol, the two fishes, and the white conch shell. The Three Jewels of the Buddha, Dharma, and Sangha are represented by blue Akshobhya at the top centre (Buddha), the four-armed yellow wisdom goddess Prajnaparamita to the left (Dharma), and four-armed white Avalokiteshvara to the right (Sangha).