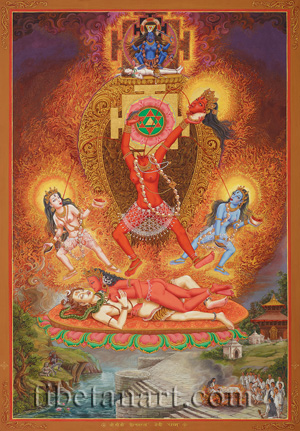 This magnificent painting by Samundra depicts Chinnamasta, the 'severed headed' yogini, who traditionally appears as the third of the ten mahavidya or 'Great Knowledge-holding' goddesses in the Hindu shakta-tantra traditions. Collectively the ten mahavidya represent the various manifestation of the great goddess Devi or Durga, who assumed these powerful and often terrifying aspects in order to pacify, subjugate or destroy some of the most potent and malevolent forces in the universe.

Chinnamasta and her two attendants appear amidst a blazing mass of wisdom fire as they dance above the copulating forms of white Shiva and red Parvati, who lie together upon the patterned golden sun disc of a multicoloured lotus. In reversed sexual posture Parvati lies on top of Shiva, her naked body adorned with gold and bone ornaments, her hair loosened, her three eyes gazing passionately at his face, and her hand pressing upon his hip. Shiva's legs are spread wide as he fondles Parvati's breast, his tiger-skin loincloth loosened, and his body adorned with rudraksha beads and the great naga-serpent Vasuki, who coils around his neck. Shiva has three eyes, his forehead is marked with a Shaivite tripundra, and his long matted hair-locks are crowned with a crescent moon and the cascading waters of the river-goddess Ganga.

Chinnamasta is deep red in colour, youthful, beautiful, passionate, and radiant like a million suns as she ecstatically dances in pratyalidha posture, with her right leg bent and her left leg extended. With her right hand she wields aloft the bloodstained curved knife with which she has just severed her own head, her index finger raised in the threatening tarjani gesture. And with her outstretched left hand she holds aloft a skull-cup that contains her own freshly severed and blood-dripping head, with its three eyes gazing upward, and its mouth wide open as her long tongue receives the stream of blood that cascades from the severed central vein of her neck. Her severed head is adorned by a golden crown with five jewel-topped skulls, and encircled by a blazing halo of yellow fire. Her naked body is adorned with ornaments of gold and filigree bone. Around her neck she wears a golden choker, a pearl necklace, a chained golden pendant, and a garland of fifty white skulls. And around her waist is a bone apron of small bone beads, with sixty-four intricate loops that bear the carved bone ornaments of little skulls, crossed-vajras, pendants, and hanging bells. The soles of her feet are marked with henna patterns of wheels, tridents and lotuses, whilst fire radiates from the dancing feet of both Chinnamasta and her attendants.

Her two attendants, red Varini and blue-black Dakini, lean outward at Chinnamasta's right and left sides, each with their own fiery aura and blazing halo. These two naked goddesses are similar in appearance to Chinnamasta, with disheveled hair, gold and bone ornaments, blood-smeared cheeks and breasts, and they both hold a curved knife and a skull-cup of blood in their right and left hands. With protruding tongues they drink the streams of blood that squirt from the severed right and left veins of Chinnamasta's neck. Symbolically, these three blood-spurting veins represent the unobstructed psychic energies of the subtle-body's median nerve or central channel, with its two subsidiary solar and lunar channels, which are respectively personified in the forms of Chinnamasta, Varini, and Dakini.

Above Chinnamasta's neck is her yantra or 'sacred-diagram', which appears as a pink eight-petal lotus disc with a green seed-head, upon which are two interlocking gold and red triangles, and an upward-pointing inner golden triangle that is embossed with her bija-mantra or seed-syllable, KRIM. Her yantra's outer square or bhupura, with its four directional gateways, is also embossed with scrolling golden patterns. Her inner aura is decorated with an assembly of mythical creatures and beings, which include: a makara, asura warriors, a dancing skeleton and a malefic khyak spirit to her right; and an elephant, a nagini or serpent-queen, a wealth god, and a garuda wrestling with two naga-serpents to her left. Her outer aura is decorated with a ring of golden skulls and scrolling motifs.

Above Chinnamasta's yantra is the golden lotus and sun disc of Dakshina Kali, who squats upon the quiescent white 'corpse' of Shiva as she passionately copulates with him. Kali is wrathful, intoxicated, blue-black in colour, with four arms, and three piercing eyes. Her disheveled locks of matted hair billow outward behind her back, her cheeks and breasts are smeared with blood, and her long bloodstained tongue hangs from her gaping mouth. She wears ornaments of gold and bone, a severed head garland, an apron of thirteen severed forearms, and a white crescent moon adorns her brow. With her two right hands she makes the boon-granting varada-mudra and the abhaya-mudra of protection, and with her two left hands she holds the severed head of an enemy and a sword. Above Kali's head is her yantra, which appears as a nine-fold downward-pointing triangle at the centre of an eight-petal lotus, with an outer black bhupura. Another large and fiery yantra appears behind her back, with its blazing central dais forming the circle of her aura, and its fiery bhupura merging with the mass of twisting flames and billowing smoke that fills the sky.

The lower landscape illustrates the environment of Pashupatinath Temple, which is the most important Shaivite Temple in Nepal, and a famous pilgrimage site for all Hindus in general. The temple is dedicated to Shiva in his aspect as the 'Lord (nath), who is the supreme lord (pati) of all cattle (pashu) or creatures'. Pashupati stands upon the eastern bank of the Bagmati River, which flows towards India as a tributary of the River Ganges, and is thus also the most sacred Hindu cremation ground in Nepal.

Samundra has depicted Pashupatinath as it may have appeared during the nineteenth century, with its four circular cremation platforms or burning-ghats separated by the steps that lead down to the Bagmati River. At this time the western bank of the river was believed to be haunted by ghosts and spirits, so upon this bank appear the small figures of a male khyak spirit and a dancing yakshini, both of whom are depicted with protruding tongues. The two-tiered temple of Pashupatinath appears amidst the trees to the right, with its lion guardians, gilded roof and doorway, and several small white Shaivite temples in front of it. In the foreground are a group of sixteen male mourners who tearfully attend the cremation of an elderly man, while his widow performs sati by ritually offering herself to the flames of her husband's funeral pyre.