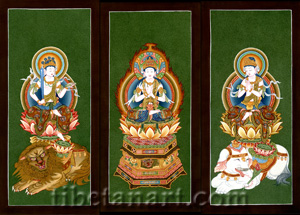 Trinity of Vairocana, Manjushri and Samantabhadra

Trinity of Vairocana, Manjushri and Samantabhadra :

SOLD: This set of three paintings depicts the trinity of Vairocana Buddha (centre), flanked by Manjushri to his left, and Samantabhadra to his right. Vairocana Buddha is known as Dainichi Nyorai in Japan, and as Palushena in China, where as Mahavairocana he is identified as the dharmakaya Buddha who represents the ultimate principal of emptiness or sunyata. As the Primordial or Adi-Buddha Vairocana occupies the central position of the Five Buddha mandala, and the two principal 'womb-realm' (garbadhatu) and 'vajra-realm' (vajradhatu) mandalas of the Shingon tradition.

Vairocana Buddha is white in colour and sits in vajra-posture upon a sun and moon disc, an open pink lotus, and an eight-sided jeweled throne that is supported by lions. He is adorned with all manner of gold and jewel ornaments, divine silk garments, and a golden crown that bears the small images of the Five Buddhas. His ornate halo is ornamented with spheres and curving rays of rainbow light, and both his halo and radiant aura are encircled by a ring of fire. With his two hands he makes the bodhyangi-mudra, or 'gesture of enlightenment', with the fingers of his right hand enclosing the raised forefinger of his left hand. This gesture symbolizes both the union of the vajra (left forefinger) in the lotus (right fingers), and Vairocana encircled by the other four of the Five Buddhas (Akshobhya, Ratnasambhava, Amitabha and Ratnasambhava).

Manjushri is youthful and white in colour, and he displays his unique characteristic of the four crowning topknots of hair that represent the peak of his central abode at Mt Wutai Shan in China. In the posture of royal-ease Manjushri sits upon a sun and moon disc and an open pink lotus, with his left foot resting upon a small lotus pedestal. His lotus seat is supported by another lotus that rests upon the back of his ferocious tawny lion vehicle, which is adorned with jewel ornaments and a silk saddlecloth. Manjushri wears gold and jeweled ornaments, and divine silk garments. With his right hand he holds the vajra-hand of his iron wisdom sword, while with his left hand he holds a scroll text of the Prajnaparamita-sutra.

Samantabhadra is white in colour and sits in sattva-paryanka posture at the centre of a pink lotus that rest upon another lotus supported on the back of his elephant vehicle. This crouching six-tusked white elephant holds a lotus stem in his trunk, and is adorned with jewel ornaments and a silk saddlecloth with a small cloud-borne lotus pedestal in front of it. Samantabhadra wears jeweled ornaments and divine silk garments, and he gazes peacefully downward with his hands palms-folded in front of his heart in the anjali-mudra of adoration.