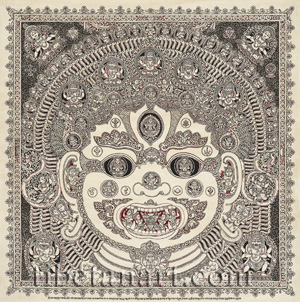 This monochrome painting by Gyankar Bajracharya depicts the Mask of Bhairava as an intricate composition of various male and female tantric deities, ritual implements and symbols. Bhairava, the "Terrifying", is the wrathful form of Shiva-Mahadeva, with eight principal aspects of Bhairava appearing in the Newar tradition as guardians of the eight directions and consorts of the astamatrika or "Eight Mother" goddesses. This wrathful face of Bhairava is based upon the large bronze mask of Akash Bhairava, which is housed in a Kathmandu temple and worshiped in a great annual Newar festival known as Indra Jatra. Akash means sky or space, and the three bulging eyes of Akash Bhairava's bronze mask fortunately gaze upward towards the sky, as his three terrifying eyes are said to destroy everything upon which his baleful gaze falls.

The pupils of Bhairava's three eyes bear the images of Chandra, the Moon-god (right eye), Surya, the Sun-god (left eye), and the goddess Tripura Sundari (third eye). Boar-headed and bear-headed guardians appear upon his serpentine eyebrows, the head of kirtimukha on the bridge of his nose, and an elephant and crocodile (makara) on the fiery facial hair at either side of his mouth. Three deities appear in roundels on the 'three bulges' of his nose and cheeks, with the eight smaller roundels on his face containing deity attributes. Inside his open mouth, with its four sharp canine teeth, is a triangular yantra flanked by naga-serpents and protector deities. Beneath the scrolling arc of his beard squats a six-armed garuda with the three strands of Bhairava's necklaces appearing behind, along with a flanking pair of jackals and two severed heads. Two wrathful figures stand inside Bhairava's ears, and his earlobes are adorned with an embracing pair of male and female naga-serpents.

The headband of Bhairava's crown is decorated with bird and animal roundels, with jewel-loops hanging below. Above each of his ears is a lotus-circle containing the image of the fire-god Agni (left) and Chandamaharosana (right). Behind these roundels appear the fan-like folds of Bhairava's crown-ribbon, which take the form of eight blade-shaped lotus stems. On each side of his ears are two scrolling roundels, the larger ones containing the forms of kneeling four-armed protector deities, while the smaller roundels above contain the hybrid form of a jackal (left) and a water-monster or makara (right), both of which have forelegs and long swirling tails.

The five main jewels adorning Bhairava's crown manifest as fiery roundels, each containing one of Bhairava's eight principal manifestations. Another two of these eight manifestations appear in the bottom left and right corners of the painting, with the Mask itself representing the 'fierce' form of Chanda Bhairava as the eighth of his manifestations. The small roundels that support these five main jewels contain images of Vedic deities, which include Kubera (lower left), Varuna (left), and Brahma (centre). Behind these five roundels appear various guardian deities, along with Ganesha (mid-right) and Kumara (mid-left).

The expanse of Bhairava's coiled and matted hair-locks are formed from a multitude of hooded naga-serpents arranged in semi-circular rows around Bhairava's head, and cascade about his shoulders below. Each of these symmetrical naga-serpents has a raised head that is crowned with a small radiant gem and a fiery mane. An outer arc of twenty-five male and female deities appear around these naga-serpents, some on the left holding attributes, having animal heads and a decapitated head, while those on the right mainly have their palms-folded in the anjali-mudra of adoration.

The dark background of this painting is composed of of scrolling roundels, with vajras and yantras in the upper corners, and an ornate canopy at the top centre. An inner border of skulls and severed heads, and an outer border of connecting lotus motifs surround this square composition.

The first part of the long inscription across the bottom of the painting consists of the deity invocation, and the second part consists of untranslatable bija or 'seed syllables'. The first part reads: Nama Maha Raudra Gagana Varchayaha Shri Shri Shri Prachanda Halahala Ugra Maha Akasha Bhairavayam Nama. Nepal Samvat 1126. Which translates as: "Salutations to the great terrifying and space-like effulgent one, to the threefold most excellent, ferocious, poisonous and violent one, the great Akasha Bhairava, salutations. Nepal year 1126 (2006)."