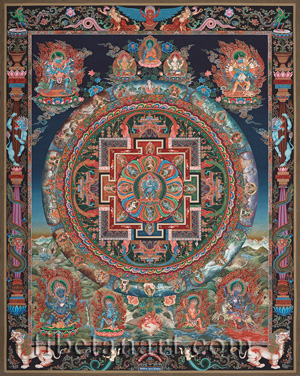 This complex painting depicts the seventeen-deity mandala of the Highest Yoga Tantra yidam deity, Hevajra, who is semi-wrathful and blue-black in colour, with eight heads, four legs, and sixteen skull-bearing arms. He stands on the central dais of the mandala in sexual union with his two-armed consort Nairatma, whose name means 'no-self'. Dancing in bow-and-arrow posture upon the eight coloured lotus petals that encircle the central dais are Hevajra's retinue of two-armed dakinis, who each hold specific attributes. Clockwise from the bottom these are: Gauri (E), Sabari (SE), Cauri (S), Candali (SW), Vetali (W), Dombi (NW), Ghasmari (N), and Pukkasi (NE). Guarding the mandala's four corners are the two-coloured offering goddesses Vina (SE), Mukunda (SW), Muraja (NW), and Vamsa (NE). And occupying the four gateways are the dakinis: crow-faced Kakasya (E), boar-faced Sukarasya (S), dog-faced Svanasya (W), and owl-faced Ulakasya (N). Along with Hevajra and Nairatma, these constitute the seventeen deities of this mandala, although more commonly horse-faced Hayasya and lion-faced Simhasya guard the east and northern gateways instead. A ring of jewels and the three protection wheels of the lotus-womb, the vajra-fence ring, and the mountain of fire wheel encircle the complex structure of the mandala palace, with its four great gateways and intricate array of roof ornaments. And outside these wheels is the highly symbolic circle of the 'eight great cemeteries' or charnel grounds. In the sky above the mandala are the representations of the 'Three Jewels', consisting of blue Akshobhya (Buddha), yellow Prajnaparamita (Dharma), and white Avalokiteshvara (Sangha). And in the upper left and right corners are twelve-armed Chakrasamvara, and twenty-four armed Kalachakra. In the lower left and right corners are four-armed Mahakala and Shri Devi (Paldan Lhamo), with blue Vajrapani and red Khadgapani standing on either side of the wrathful skull offering at the bottom centre. The dark outer border or torana of this painting is embellished with the traditional Newar symbols of a garuda with naga serpents and flute-playing kinnaras in the upper area; blue lions, red dragons and ornate pillars on the sides; garuda-lions in the lower corners, and naga-serpents on either side of the inscribed plaque at the bottom centre.

This complex mandala was painted by Sundar Sinkhwal in 2005 and took ten months to complete, and it depicts the seventeen-deity mandala of Hevajra in his sixteen-armed skull-bearing form. Hevajra appears on the central dais of the mandala in union with his two-armed consort Nairatma, whose name means 'no-self'. She is blue-black in colour and holds a curved-knife in her extended right hand, and a skull-cup in her left hand as she embraces the neck of her lord.

Hevajra is blue-black in colour, with sixteen arms, four legs, eight faces, and twenty-four eyes. In dance posture he stands upon a sun-disc and lotus with his four feet pressing upon the four maras, who manifest in the forms of the Hindu gods, yellow Brahma, white Shiva, green Vishnu and blue Yama. With his eight right hands he holds skull-cups that contain: a white elephant, a blue horse, a brown ass, a red ox, a grey camel, a red man, a blue sharabha or lion-antelope, and a black cat. These eight animals represent the eight directional guardians or lokapalas, and they all gaze inward towards Hevajra to indicate that they can cure all beings of the eight great illnesses. With his eight left hands he holds skull-cups that contain: the yellow earth-goddess Prithvi, the white water-god Varuna, the green wind-god Vayu, the red fire-god Tejas, the white moon-god Chandra, the red sun-god Aditya, the black death-god Yama, and the yellow wealth god Dhanda or Kubera. These gods represent the eight great planets and they gaze outward away from Hevajra with their palms-folded. This indicates that Hevajra controls the malefic influences of all the planets, and grants the eight great qualities to all practitioners of the Hevajra Tantra.

Guarding the four corners of the mandala are the goddesses Vina (southeast), Mukunda (southwest), Muraja (northwest), and Vamsa (northeast), each of whom have the right and left sides of their bodies coloured to correspond to the four directional quadrants of the mandala. And guarding each of the four gateways are the goddesses: blue crow-faced Kakasya (east), yellow boar-faced Sukarasya (south), red dog-faced Svanasya (west), and green owl-faced Ulakasya (north). Although more commonly the eastern and northern gateways are guarded by horse-faced Hayasya and lion-faced Simhasya.

The square geometric structure of the mandala palace is intricately ornamented with all manner of decorative elements and auspicious offerings. The eight offering goddesses appear on the red plinth that surrounds the palace's five-coloured walls, with vajra-marked crescent moons positioned at the corners and ends of the plinth to symbolize the union of relative and absolute bodhicitta. The four outer corners of the square represent the ornate structure of the roof, with a red beam representing the frieze of the five elements, then a blue section with hanging loops of jewels that represents the roof's jeweled and latticed ventilation structure, and above this are two white sections that represent the rain-spouts and the lotus parapet that crowns the top of the roof. The intricate pillars, arches and layered lintel structures of the four gateways ascend above each directional side of the square, with paired sharabhas, monkeys, birds and deer appearing upon their ornate steps. Two makaras and the serpent-devouring face of kirtimukha guard each of the gateway's arched toranas, beneath which hang loops of jewels and red yak-tail pendants. Enclosing these four gateways are the prongs of the vast crossed-vajra that underlies and supports the base of the entire mandala palace, with its prongs coloured to correspond to the four directions. And on either side of the makara-heads from which these prongs emanate are the roof ornaments of ritual vases, bird and jewel emblems, the eight auspicious symbols, and eight mahasiddhas.

A scrolling ring of jewels encircles the outer structure of the mandala palace, and outside of this are the three great protection wheels of the 'lotus-womb', the 'vajra-fence and canopy', and the 'mountain of fire', which respectively protect the mandala from floods, earthquakes, and conflagration. The 'lotus-womb' symbolizes the purity of being reborn or initiated into the mandala, and it consists of a circle of sixty-four variegated double-lotus petals that rotate in a clockwise direction. The 'vajra-fence and canopy' is an impenetrable hemisphere of interlocking vajras that completely covers the entire mandala to protect it from vow-breakers, and it is depicted here as a narrow red ring with thirty-two black vajras encircling it. The 'mountain of fire' is a vast hemispherical dome of flames that likewise covers the entire mandala and burns away all impurities, and it is represented here by a ring of forty variegated banks of wisdom-fire that rotate in a clockwise direction.

In the sky directly above the mandala is the trinity of blue Akshobhya Buddha (centre), four-armed yellow Prajnaparamita (left), and four-armed Avalokiteshvara, who respectively represent the 'Three Jewels' of the Buddha, Dharma and Sangha. In the upper left corner is twelve-armed Chakrasamvara with his red consort, Vajravarahi; and in the upper right corner is twenty-four armed Kalachakra with his golden consort, Vishvamata.

The inner border of the painting is decorated with brocade designs, and the dark outer border or torana with a complex assembly of auspicious motifs and mythical creatures. At the top centre is the crowning form of a red garuda with his blue wings spread wide, and flanking garuda are a male and female naga-serpent, both of whom appear in human forms with long serpentine tails. Crouching upon lotuses in the upper corners are two flute-playing kinnaras, the semi-divine beings that serve as musicians to the gods, who have green upper bodies and bird-like lower bodies with long scrolling tails. Ascending on either side of the torana are ornate pillars, with roaring blue lions embracing the upper section of the pillars, and jewel-grasping red dragons coiled around their lower sections. In the lower corners are two white griffins or garuda-faced lions, and on either side of the emblem at the bottom centre is another pair of male and female naga-serpents, with white human upper bodies and the lower bodies of serpents. The emblem's curved red plaque bears the inscription: Shri Hevajra Nairatma Shakti Mandala Nama; and the lower blue plaque bears the name of the artist, Sundar Sinkhwal.