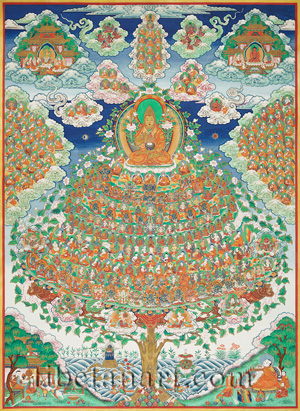 This Refuge Tree or 'Merit Field' (Tib. shog-shing) depicts the assembled deities and lineage gurus of the Gelug or 'virtuous path' school of Tibetan Buddhism. This thangka was painted probably in Eastern or Central Tibet in the 19th or early 20th century, and is meticulously accurate in its iconography, with a skillful use of fine gold lines employed to depict the auras, ornaments and hand attributes of each figure and deity. These deities are arranged in horizontal rows upon the branches of a great lotus-tree that arises from a lake, with the various assemblies of lineage gurus appearing on clouds above.

At the apex of the tree sits Tsongkhapa (1357-1419), the great philosopher and founder of the Gelugpa or 'reformed' yellow hat tradition, who bears Manjushri's wisdom attributes of a sword and scriptural text, and he bears the small images of Shakyamuni Buddha and Vajradhara enshrined inside his heart. Directly below Tsongkhapa are nine of his main disciples, and below these are the four main 'Highest Yoga Tantra' yidam or meditation deities of the Gelugpa tradition: Hevajra (left), Guhyasamaja, Vajra Bhairava, and Chakrasmvara (right).

In the next four rows that descend below are the principle deities of the 'four classes of tantra': (1) Highest Yoga (anuttarayoga); (2) Yoga (yoga); (3) Performance (carya), and (4) Action (kriya) Tantras. In the next four descending rows are the assembled deities of the Sutra Tradition, which consist of: (1) the Thirty-five Confessional and Eight Medicine Buddhas; (2) Bodhisattvas; (3) Pratyekabuddhas or 'solitary realizers', and (4) Arhats. In the next row are the male dakas and female dakinis, or 'heroes and heroines'. And in the bottom row of the tree are the main dharmapalas or protector deities of the Gelugpa Tradition.

Flanking the tree's trunk are the Vedic gods Brahma (left) and Indra (right), while the 'Four Great Kings' guard the four directions around the great lotus and lion-throne that supports the canopy of the tree. At the base of the tree are many precious offerings, such as jewels, Mt Meru, naga-serpents, and the eight auspicious symbols. In the bottom left corner are representations of the 'seven secondary possessions' of the chakravartin or universal monarch. And in the bottom right corner is the disciple and lineage-holder Khedrub Je, who offers a mandala to Tsongkhapa and the enlightened assembly of his Merit Field.

Appearing amidst clouds to Tsongkhapa's right (left side of painting) are forty-six teachers of the 'lineage of extensive method', who descend from Maitreya and Asanga at the top. And amidst the clouds to Tsongkhapa's left (right side of painting) are forty-eight teachers of the 'lineage of profound wisdom', who descend from Manjushri and Nagarjuna at the top.

Directly above Tsongkhapa are the teachers of the 'tantric lineage', who descend in three columns from Vajradhara and Manjushri at the top centre. On each side of these columns is a cloud that supports five of the great Indian mahasiddhas, who were the first lineage gurus of the Hevajra, Guhyasamaja, Vajra Bhairava, Vajravarahi and Chakrasamvara Tantra transmissions. On the two cloud banks below appear the 'five manifestations of Tsongkhapa' (left), and five of the great early Kadampa masters.