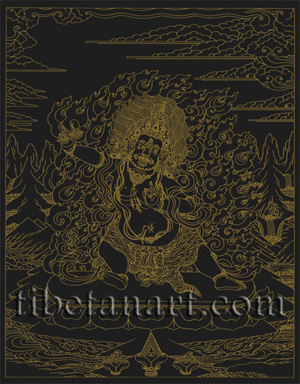 Vajrapani (Tib. Chana Dorje), the 'holder of the vajra', is one of the earliest and most important Bodhisattvas of Mahayana Buddhist, who frequently appeared as a 'bodyguard' attendant of Shakyamuni Buddha that held a heavy vajra-club or mace. Vajrapani is the 'spiritual son' of Akshobhya Buddha, who in his wrathful aspect embodies the spiritual power and energy of all the Buddhas. The three enlightened qualities of the Buddha - wisdom, compassion and power - are respectively symbolized by the three great Bodhisattvas - Manjushri, Avalokiteshvara and Vajrapani, who are collectively known as the 'Lords of the Three Families'.

Vajrapani stands upon a moon and sun disc and a lotus, in the midst of a blazing mass of wisdom fire. His body is blue-black in colour, and he leans towards the right in alidha posture, with his right left bent and his left leg extended. He is youthful, strong and wrathful like a yaksha, with a powerful body, stout limbs, and a protruding stomach. He has three round red eyes, upward blazing red facial hair, and a gaping mouth that reveals his twisting tongue and four sharp canine teeth. The tawny hair of his head streams upward like fire; with a topknot that is bound by a small serpent and sealed with a half-vajra that symbolizes Akshobhya Buddha. He is adorned with the golden ornaments of a five-jeweled crown, earrings, necklaces, bracelets, armlets and anklets. The eight naga-serpents adorn his ornaments, and he wears a tiger-skin loincloth, a long billowing silk scarf, and a long green serpent that serves as his sacred thread. With his raised right hand he holds aloft a five-pointed vajra, while with his left hand he makes the threatening tarjani or 'raised forefinger' gesture in front of his heart.