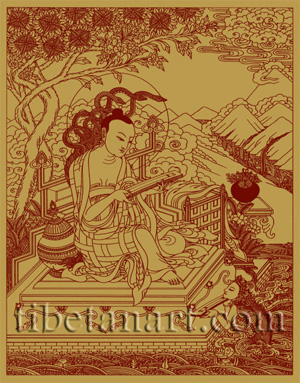 Many stories and legends surround the figure of Nagarjuna, who according to Tibetan tradition was born in the second century AD and lived for at least six hundred years. But these legends are probably woven around two separate teachers that bear the same name of Nagarjuna, who have come to share a common identity: Arya Nagarjuna, the second century philosopher who founded the Madhyamaka school of philosophy and revealed the Prajnaparamita Sutras; and the ninth century Mahasiddha Nagarjuna who practiced alchemy and was a master of the Guhyasmaja Tantra.

Arya Nagarjuna was born as a Brahmin in South India around the second century. His birth was prophesized in the Lankavatara Sutra and he is sometimes known as the 'Second Buddha'. It was also foretold that his life would be very short, but through devotional practices his life was extended. He was ordained as a monk when he was eight years old, and after becoming proficient in all branches of Buddhist knowledge he later became abbot of Nalanda Monastery.

On account of his wonderful discourses the king of the nagas - the serpentine guardians of the underworld and spiritual treasures - invited him to teach is his aquatic realm deep in the ocean. From the nagas he received the Prajnaparamita Sutra in both its expanded 100,000 verse, and abbreviated 8,000 verse forms. This Sutra, or 'Discourse on the Perfection of Wisdom', was said to have originally been concealed in the naga realm by the Buddha's close disciple, Ananda.

Najarjuna founded the Madhyamaka School of philosophy, with its emphasis on 'emptiness' (sunyata), and the 'two truths' of relative and absolute understanding. Madhyamaka, meaning the 'Middle Way', avoids the extremes of duality, and this school eventual became the main philosophical system of Mahayana Buddhism.

Nagarjuna, along with Asanga - who founded the Yogacarya School of philosophy in the fourth century - are recognized as the two greatest proponents of Indian Mahayana Buddhism. His main writings are known as the Six Works of Nagarjuna, which contains his famous exposition known as the Madhymakamula-karika. Amongst his many disciples appear such illustrious names as Aryadeva, Buddhapalita, Bhavaviveka and Chandrakirti.

This drawing is based on a series of nine wood-block prints from the monasteries of Narthang and Tashilunpo in Tibet. Nagarjuna is shown seated on a throne and receiving the Prajnaparamita Sutra from a naga-serpent. The seven nagas above his head allude to an episode when Nagarjuna was teaching in a garden and the nagas formed a parasol over his head to protect him from the heat of the sun.