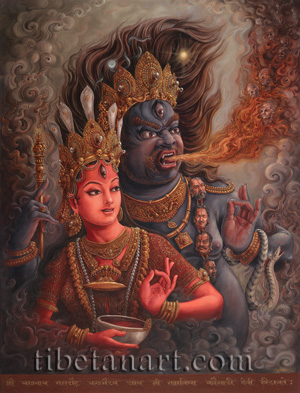 Heads of Bhairava and Kaumari

Heads of Bhairava and Kaumari :

This oil portrait was painted by Samundra Man Singh Shrestha in 2008, and depicts the two-armed aspects of the mother-goddess Kaumari and her consort, Chanda Bhairava. The assemblies of the 'eight mothers' (astamatrika) and the 'eight Bhairavas' (astabhairava) are of great importance in the Newar tradition, where they frequently serve as female and male directional guardians, and they commonly appear as carvings on the sixteen wooden struts that support the tiered roofs of many Newar temples. The 'eight Bhairavas' are the eight wrathful manifestations of Mahadeva; and the 'eight mothers' are the eight female energies (shakti) of Mahadevi, who manifest as the counterparts of eight great Hindu gods.

Kaumari is the counterpart of Kumara, the 'youthful' son of Shiva and younger brother of Ganesh, who was conceived in order to lead the army of the gods to their victory over the demons or asuras.

Kaumari is beautiful, youthful and pale red in complexion, with two arms and three eyes. Her upper body emerges above the swirling mass of wind and smoke that fills the background of this composition as she stands to the right of Bhairava. With her right hand she holds a skull-cup full of blood in front of her heart, its rim edged with gold and bearing a small mask of Bhairava at its front. With her left hand she makes the bindu-mudra above the skull-cup, the tips of her third finger and thumb touching, and its palm stained with a decorative henna design. She wears a gold ring on each of her third fingers, heavy golden bracelets and armlets, and an embroidered red silk bodice that conceals her full breasts.

Around her neck she wears three traditional ornaments of the Kumari. The first is an ornate golden choker embellished with two peacocks, which represent her mount or vehicle. The choker is secured by a golden chain and two strands of beads behind her neck, and from the centre of its jewel-studded rim hangs a small pendant that bears the symbol of a ritual vase or pot. The second of Kumari's neck ornaments is her lozenge-shaped golden tayo, which is fastened by three mounted jewels onto a crest of eleven naga-serpents, each of which has a small golden gem crowning its head and a tear-like pearl hanging from its mouth. The tayo is suspended on two embellished golden straps that are fastened together behind her neck. The third of Kumari's neck ornaments is her long garland of gold-plated heads (narasilamala), each of which hangs from a delicate golden chain. Inside of this chain is another necklace of crystal beads.

Kaumari's forehead is cosmetically adorned with vermilion pigment, her three lotus-like eyes are heavily lined with black kohl, and her red lips are slightly parted to reveal her upper teeth. She wears round golden earrings with a crystal at their centre, and the tresses of her long black hair hang freely behind her back. Her golden crown is adorned with five intricate mounts that are studded with small gems and a central crystal. Above these mounts ascend five silver kikinpa blades, which are ornamented on their edges with lotus-petal motifs, and sealed at their tops with the golden emblems of a sun and crescent moon. Five skulls adorn her crown's headband, beneath which hang loops of pearls and tiny golden bells.

Chanda Bhairava, meaning 'the fiercely-terrifying', is extremely wrathful and blue-black in colour, with two arms and three bulging eyes. His powerful and corpulent body is smeared with cremation ash, and around his neck he wears a heavy golden choker that is embellished with the serpent-devouring head of Garuda. This choker is secured by a golden chain behind his neck, and from the centre of the choker's jewel-studded rim hangs a small pendant bearing the symbol of a ritual vase. Below this hangs a tubular golden necklace with a square reliquary-box hanging at its centre. His shoulders are adorned with a string of golden beads and little circular bells, and a long garland of severed asura heads strung on two golden chains is hanging around his neck. He wears heavy golden bracelets, and a ferocious naga-serpent crowned with a radiant gem coils around his left arm. With his left hand he makes the bindu-mudra, with his third finger and thumb touching. And with his right hand he holds a heavy golden club, which is crowned with four skulls and a vajra.

Bhairava's wrathful face has a wrinkled and frowning expression, with the facial hair of his eyebrows, moustache and beard blazing upward like tongues of red fire. His three round and bloodshot eyes gaze menacingly towards the skulls that appear amidst the blazing mass of fire that streams from his mouth, which represents his destruction of all demonic enemies, obstacles and vow-breakers.

His golden crown is adorned with five intricate mounts that are studded with a ring of gems and a central crystal, with a small image of Akshobya Buddha crowning the top of the central mount. The crown's headband is decorated with two naga-serpents, a small central mask of Bhairava, and four skulls. His tawny and matted hair-locks stream upward above his crown, with a coiled naga-serpent appearing at its centre, and the emblems of a silver crescent moon and a golden sun circling on either side.