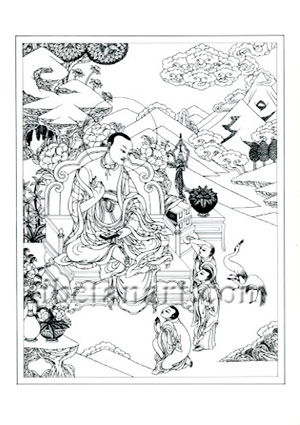 Vasubhandu (Tib. dByig'-ngyen), who lived around the turn of the 5th century, was the younger brother of Asanga, and he is recognized as one of the 'Six Adornments' of Indian Mahayana Buddhism. In Kashmir he studied the teachings of Theravada Buddhism and wrote an important text know as the Abhidharmakosha. But later he was drawn to the Mahayana teachings by his brother's (Asanga) discourses. He succeeded Asanga as the abbot of Nalanda Monastery, and went on to develop the philosophy of the Cittamatra School