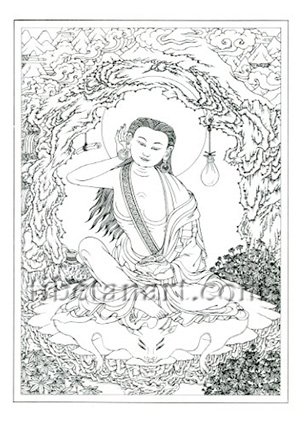 A set of twelve B/W Notecards with line-drawings by Robert Beer, which depict some of the most important Indian and Tibetan Buddhist lineage holders and gurus. The Notecards come with envelopes, and have a short biography of the lineage master depicted. Priced at £0-70 each, or £5-40 for the full set of twelve.

Milarepa was Tibet's most beloved yogin and poet, whose famous biography and collection of songs have served as a constant source of inspiration for all schools of Tibetan Buddhism. Under the guidance of his guru, Marpa, he underwent great penance for his early misdeeds. Clad only in a cotton robe, and living for a long time on nettles, he meditated for years in remote mountain caves until his ultimate enlightenment.