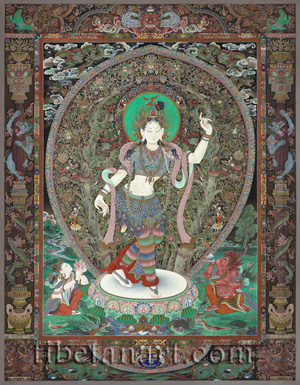 This great masterpiece of Chintamani Lokeshvara was painted over a period of three years by the famous Newar artist Siddhimuni Shakya (1933-2001), and his son, Surendra Man Shakya (born 1967). Siddhimuni chose to devote the last ten years of his long painting career to the creation of three paintings, within which he could embody the full iconographic spectrum of his unique artistic vision. These three paintings are the most important Newar works of the last century, and I was able to acquire two of these paintings, Vasundhara and Chintamani Lokeshvara, shortly after Siddhimuni's death in 2001. The third painting was of Manjushri and his two consorts, which was bought by a collector from Japan.

Chintamani Lokeshvara, the 'wish-granting gem (chintamani) and lord of the world (lokeshvara)', appears as one of the hundred-and-eight different Newar Buddhist manifestations of Avalokiteshvara, the bodhisattva of great compassion. He is radiant and white like the autumn moon, with two arms, two bow-shaped eyes and a sweetly smiling face. In 'triple-bend' posture he stands gracefully upon a white moon disc and a multicoloured lotus, as he steps from a magnificent grove of wish-granting trees, the entwined branches of which form his intricate aura. With his raised left hand he grasps a branch of a wish-granting tree, while with his lowered right hand he makes the boon granting varada-mudra while he holds a small 'triple-gem' fruit from this tree between his index finger and thumb.

Lokeshvara's beautiful and youthful body is adorned with various exquisite garments of embroidered silk, and all manner of precious gold and jeweled ornaments. He wears a long garland of flowers with an embellished pendant at its centre, and his characteristic emblems of a serpent-necklace and an antelope-skin that is draped over his left shoulder. His long black hair is piled up into a topknot and hangs freely about his shoulders, and the small image of Amitabha Buddha adorn the centre of his five-jeweled crown. His radiant green halo is encircled by a jeweled torana that is adorned with a pair of makaras or 'crocodiles' with small figures in their mouths, a pair of peacocks and coiling naga-serpents, and the crowning serpent-devouring image of kirtimukha.

The canopy of wish-granting trees that form Lokeshvara's aura is lavishly adorned with a multitude of auspicious symbols and motifs. The trees themselves have a large variety of stylized branches, leaves, flowers and buds, with many small triple-gem fruits appearing repeatedly throughout the foliage. Dragons and naga-serpents coil around the symmetrical trunks of the foreground trees; monkeys, birds and the 'eight auspicious symbols' appear in the upper canopy; and a garuda supports the pedestal of an elaborate lotus-mounted vase, parasol and jewel frieze at the top centre. At the centre of his aura are two naga-serpents who present bowls of precious offerings to Lokeshvara, and below each naga is an offering goddess who holds a long garland of flowers.

The outer arc of Lokeshvara's aura is ornamented with a frieze of scrolling jewels, and in the dark sky above are jewel-grasping dragons that writhe amidst billowing clouds. A peacock, deer and pheasants appear in the lower landscape, and in front of the large leaf that supports Lokeshvara's lotus pedestal appears an offering of the five sensory objects. Kneeling in adoration at either side of Lokeshvara are his two Newar attendants. To his right is the white bodhisattva Lutavati, who holds a pink lotus. And to his left is the fleshy-brown ganadevata or 'dwarf-deity' Ranikunda, who is corpulent, hairy and semi-wrathful, and holds a bowl of jewels and a wish-granting gem. In the Indo-Tibetan tradition Avalokiteshvara's two main attendants are usually Green Tara and Hayagriva.

The two inner borders of the painting's rectangular torana are decorated with intricate scrolling patterns and colourful brocade designs, while the broad outer torana is decorated with a complex assembly of mythical creatures. At the top centre is the crowning serpent-devouring image of kirtimukha flanked by two naga-serpents. In the upper corners are two flute-playing kinnaras or 'what-men' that serve as musicians to the gods and have the lower bodies of birds with swirling tails. On each side of the torana is an ornate 'vajra-pillar' that ascends from a treasure-vase and has an elaborate capital that is crowned with a bowl, which bears the lotus-pedestal that supports each kinnara. A green naga-serpent coils around the lower shaft of each pillar, while a ferocious blue lion clings to its upper shaft. In the torana's lower corners are ferocious makaras with fabulously scrolling tails, and next to these are jewel-grasping dragons with their long coiling tails entwined at the bottom centre. In the middle of the elaborate semi-circular arc or scrolling emblem at the bottom centre is an assembly of the 'eight auspicious symbols' arranged in the shape of a vase. Upon the blue base of this vase are inscribed the names of the artists, and below this the Newar year of the painting's completion, 1999, (Nepal samvat 1119), is given. Above this is inscribed the deity invocation, Shri Chintamani Lokeshvaraya Nama.