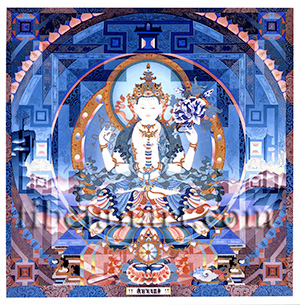 I made this small gouache painting in 1976. It only measures ten inches (25 cm) in size, but its 'dimension' was quite unusual for its time and many artists in Nepal later copied it. Interestingly the idea of superimposing an ethereal mandala over a natural setting or landscape was a concept that inspired John Miles around the same time, though we came to it independently.