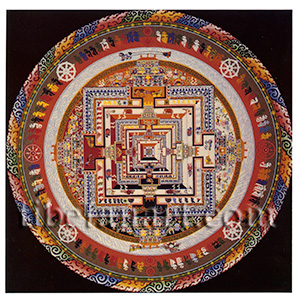 The Kalachakra, or 'Wheel of Time', is an extremely complex tantric system of late Indian Buddhist origin, the initiation into which has now been extensively given by His Holiness the Dalai Lama and several other great Tibetan lineage holders of the Kalachakra teachings. An important aspect of this initiation involves the creation of Kalachakra's elaborate mandala of 722 deities that is traditionally made from grains of 'sand' or coloured powders, which are meticulously sprinkled onto the mandala's flat wooden base through conical metal funnels. This particular sand mandala was constructed for the Kalachakra Initiation given by His Holiness the Dalai Lama at Rikon, Switzerland, in 1985.