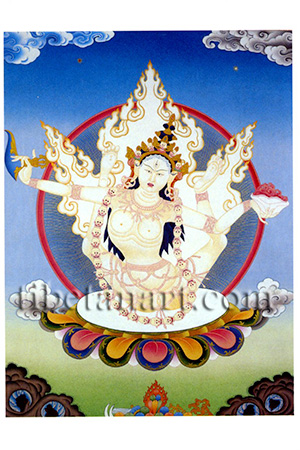 White Khechari is a secret form of Vajrayogini, whose practice is transmitted through the Tibetan Shangpa Kagyu tradition. The red and white aspects of Khechari were first revealed by the great eleventh century Indian yoginis, Niguma and Sukhasiddhi, who were the two female teachers of Khyungpo Naljor, the founder of the Shangpa tradition. White Khecari is seated in the sky upon a white moon disc and a multicoloured lotus, with her legs raised to the level of her ears as she shamelessly reveals open vagina. She is white in complexion, beautiful and lusty, with firm breasts, a narrow waist, three piercing eyes, and a slightly wrathful expression. Her long black hair is bound up into topknots and hangs freely behind her back. She is naked and adorned with a five-skull crown, the five bone ornaments, and a long garland of fifty dry white skulls. In her outstretched right hand she holds a vajra-handled curved knife, and in her outstretched left hand she holds a skull-cup full of the blood. The knife symbolizes her severance of all delusions, and the blood-filled skull-cup her realization of great bliss. An aura of light rays radiates from her body, and the white flames that emanate behind her symbolize her perfection in the yogic practice of 'inner heat' or tummo (Skt. chandali).