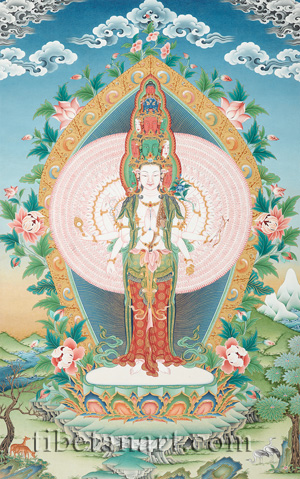 Avalokiteshvara, the 'Beholding Lord', is the Bodhisattva of Compassion and the patron deity of Tibet, who appears here in this painting by Mangal Lama in his eleven-faced and thousand-armed form.
According to legend Avalokiteshvara once vowed that he would first free all beings from suffering before attaining liberation himself, so he set about this task with great effort. But when he saw how few he had so far saved compared to how many still actually remained, his sudden despair caused his head and body to explode into countless pieces. Seeing his plight, Amitabha Buddha then came swiftly to his aid, and from the shattered fragments reconstructed his body into a far more efficient form, with eleven heads and a thousand arms. In this powerful form he was now able to gaze compassionately over all beings throughout the ten directions of space, and be able to reach out to help them with his thousand 'all-seeing' hands.

Avalokiteshvara is white in colour and stands upon a white moon disc and a multicoloured lotus in an upright posture where he can 'glide like a swan'. His beautiful body is adorned with the five divine silks and the eight jeweled ornaments of a sambhogakaya deity, and his characteristic antelope skin is draped across his left shoulder. He has eleven heads or faces, eight principal hands, and nine hundred and ninety two secondary or 'branch' hands, which radiate outwards in six symmetrical and fan-like semi-circles. Each of his hands has an outward-gazing eye in its palm, with its five fingers representing the five 'method' perfections of generosity, morality, patience, perseverance and concentration, and the eye itself the sixth perfection of 'wisdom'. Of his eight principal hands: the first pair are palms-folded in front of his heart; his second pair of right and left hands hold a crystal rosary and a blue utpala lotus; his third pair hold a golden wheel and a bow and arrow, and his fourth pair make the varada-mudra of generosity and hold a golden water flask.

His eleven heads are arranged in five tiers that diminish slightly in size as they ascend, with the three lower tiers each consisting of three faces that alternate in a white, red and green sequence. Each of these nine faces has a peaceful and smiling expression with two bow-shaped eyes, and is adorned with a five-jeweled crown. On the fourth tier is a wrathful blue face with a gaping mouth and three baleful eyes; and crowning the fifth tier is the red face of Amitabha Buddha. All of these eleven faces are enclosed within the five-fold arcs of Avalokiteshvara's flame-encircled halo, and his blue inner aura is radiant with the golden light rays of wisdom and compassion that emanate from his body. His golden outer aura is fashioned in flame-like sections of scroll-encased jewels, and is surrounded by a profusion of lotus flowers and leaves.

He abides within a beautiful and natural landscape of clouds, mountains, water, trees and rocks, with the longevity symbols of a pair of deer and cranes appearing in the lower corners.