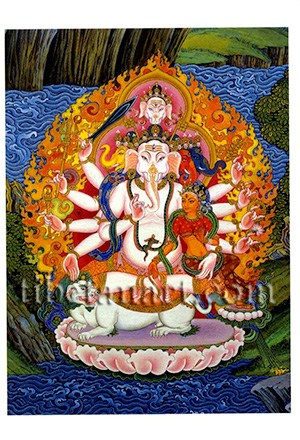 Seated upon a lotus, a silver moon disc, and a roaring white lion is the ten-armed form of Ganesha, the elephant-headed 'remover of obstacles', who appears here as Heramba Ganapati, the protector of the poor and weak. His complexion is white, and his five elephant heads are coloured white (centre), yellow (right), red (left), black (rear), and white (top). With his first right hand he holds a small stone lingam, and his other four right hands hold a sword, a trident, a club, and make the open-palmed gesture of generosity. With his first left hand he embraces his golden-orange consort, Lakshmi, who sits upon his left knee and makes the gestures of generosity and fearlessness with her right and left hands. Ganesha's other four left hands hold an ear of grain, a rope-noose, a chakra or discus, and a white lotus. He sits amidst a blazing mass of wisdom fire.