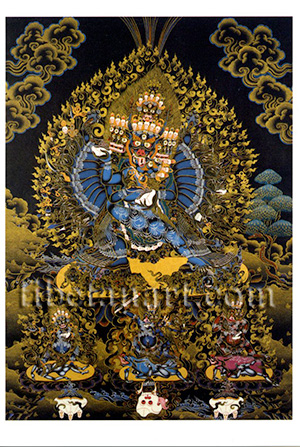 Yamantaka, the 'slayer of the lord of death (Yama)', is depicted here in his yab-yum form as Vajrabhairava, a wrathful manifestation of Manjushri, the bodhisattva of Wisdom. He is extremely fierce and blue-black in colour, with nine faces, thirty-four arms, and sixteen legs. His principal face is that of a black buffalo, with three round red eyes, a roaring fanged mouth, and a pair of sharp sky-blue horns that are tipped with fire. The three heads to the right of his central face are coloured yellow, blue and red; and to the left grey, white and black. Above his buffalo head is a wrathful blood-dripping red head, and above this is the semi-wrathful yellow head of Manjushri. Each of his nine heads is adorned with a five-skull crown, and their tawny locks of hair blaze upwards like fire. With his two principal arms he holds a curved knife and a skull-cup full of blood, as he embraces his wrathful blue consort, Vajravetali (Tib. rDo-rje ro-langs-ma), the 'indestructible resuscitated corpse'. She is blue in colour, with one face and two arms - the right holding a curved vajra-knife behind his neck, and the left offering a skull-cup full of blood to one of his mouths. With his two upper arms Yamantaka stretches the bloody skin of an elephant across his back, and with his other thirty outstretched hands he holds an array of weapons and ritual implements.
Beneath his eight right feet are eight mammals (human, buffalo, ox, mule, camel, dog, sheep, fox), and beneath these are the four Hindu gods Brahma, Indra, Vishnu and Rudra, who represent the four maras. His eight left feet trample upon eight birds (vulture, owl, raven, parrot, hawk, garuda, cockerel, swan), and the four great gods Kumara, Ganesh, Chandra and Surya. In 'warrior stance' he leans towards the right upon a sun disc and lotus. He is adorned with the six bone ornaments, a loosened tiger-skin loincloth, a serpent necklace, and a rosary of fifty freshly severed heads. His naked consort is adorned with the five bone ornaments and a garland of fifty dry white skulls, and they stand together in sexual union amidst a blazing mass of wisdom fire.
At the bottom of this thangka are the outer, inner and secret forms of Yama Dharmaraja, the 'Lord of the Dead'. The 'outer' form of blue Yama appears at the centre. He is naked with the head of a buffalo and an erect penis, and he tramples upon a blue buffalo and a human enemy, while holding a skull-club and a rope noose in his right and left hands. Chamunda, his naked consort, wears an ox-hide over her back and stands to his left as she holds a trident and offers a skull-cup of blood to her lord. At the bottom left is the dark blue 'inner' form of Yama, who has the face of a demon, wears a tiger-skin loincloth, and tramples upon an enemy as he holds a skull-cup of blood in his left hand, and a curved knife in his right hand. At the bottom right is the 'secret' form of red Yama, who is similar in appearance to blue Yama, but appears without a consort. He tramples upon a red buffalo and a human enemy, and holds a faceted jewel and a skull-cup full of blood in his right and left hands.