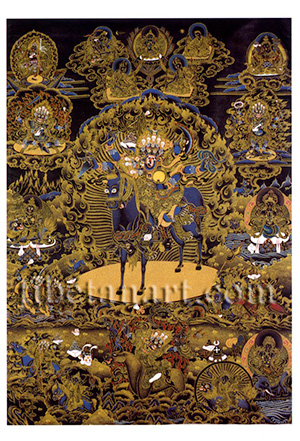 This black thangka depicts the union of the main Karma Kagyu protector, Dorje Bernagchen, and Palden Lhamo in her form as Ranjung Gyalmo, the 'Spontaneously Self-arisen Queen'. This image of the 'Great Goddess in Face-to-Face Union with her Consort' originates from a vision of the second Karmapa, Karma Pakshi (1204-83), and is unusual in its depiction of a male deity seated in reversed sexual union (yum-yab) upon the lap of the female protector. Dorje Bernagchen, the 'Black-cloaked One', is a dwarf form of Mahakala, who wears nine robes of embroidered black silk, and holds a crescent-shaped chopper and a skull-cup full of blood in his right and left hands. Rangjung Gyalmo sits upon her 'blue iron mule' that stands upon a sun disc and lotus. She holds a khatvanga-trident and a triangular iron dagger (phurba) in her two right hands, and a mirror and a serpent-noose in her two left hands.

Crowning this thangka's top centre is Vajradhara, with Dombhi Heruka (left), Marpa (right), Karma Pakshi (lower left), and Karmapa Mikyo Dorje (lower right). In the top left corner is Vajravarahi, and below her is Four-armed Mahakala. In the top right corner is four-armed red Jinasagara or Gyalwa Gyamtso (Avalokiteshvara) with his consort, and below him is Six-armed Mahakala. At the centre left is the wealth god Vaishravana, and below him is the wrathful black form of Srin-mgon thod-pa'i phreng-ba-can, the 'Lord of the Rakshas with a Garland of Skulls', and his red consort Srin-mo 'bar-ma dmar-mo, the 'Mistress of Rakshasis, the Blazing Red One'. At the centre left is Klu'i-rgyal sngad-kyi bdag-po, the 'Naga King, Master of Herbs'; and below him is the 'Field Protector', Kshetrapala (Tib. Zhing-skyong) and his consort. At the bottom centre is the 'Dark-Blacksmith', Dam-can rdo-rje legs-pa, who wields a foundry hammer and bellows, and rides upon a goat with twisted horns. In the lower left corner are Trakshad Mahakala (above), and the protective goddess Achi choki (A-pyi chos-kyi), the 'Protectress of Dharma', both of whom are mounted upon horses. In the lower right corner is black Klu-rgyal mkha'-nag, the 'Naga King, Black Sky', who is mounted upon an elephant; and the Kagyu protector goddess Tashi Tseringma, who is mounted upon a lion.