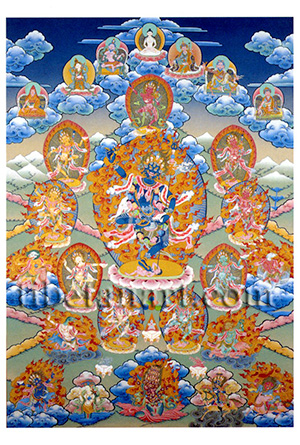 Troma Nagmo (Skt. Krodha Kali), the 'Wrathful Black Dakini', is a fierce black aspect of Vajravarahi, whose visualized form is employed in the Chod practice for cutting through strong attachments, and this particular thangka belongs to the Dudjom Tersar tradition of Dudjom Rinpoche. In bow-and-arrow posture she dances upon a corpse, sun disc and lotus, as she holds a vajra-handled curved knife in her outstretched right hand, and a skull-cup full of blood with her lowered left hand. Her body is blue-black in colour and she wears the five bone ornaments, a garland of fifty severed heads, a tiger-skin loincloth, a human-skin shawl, an elephant-skin is stretched behind her back, and a trident-topped khatvanga rests in the crook of her left arm. Her tawny hair streams upward above her five-skull crown, and from the crown of her head emerges the fierce and squealing head of a sow.

Surrounding Troma Nagmo are the eight dakinis of her mandala, four of which are identical to her in form, but coloured to correspond to the four directions; white (east), yellow (south), red (west), and green (north). The other four dakinis of the inter-cardinal directions are also coloured white, yellow, red and green, but hold different attributes in their right hands. Below these eight dakinis are the four animal-headed guardians of her mandala's four gateways. Above Troma Nagmo is the semi-wrathful form of Vajravarahi, and above again is white Samantabhadra with six of the Indian and Tibetan lineage holders of the Chod and Nyingma traditions, and at the bottom are five protector deities.