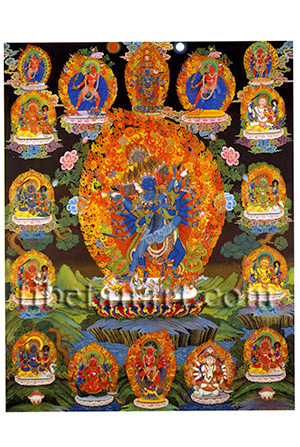 Hevajra is a yidam deity that belongs to the Highest-Yoga class of 'mother-tantras', and he is represented here in his form as 'Weapon Hevajra' (Ayudha Hevajra), with eight faces, four legs, and sixteen arms - each of which holds a specific implement. Hevajra is blue-black in colour and with his two principal arms he embraces his blue consort Nairatma, who has one face and two arms. With his four feet Hevajra tramples upon the 'four demonic obstructions or maras', which are represented here by the four Hindu gods; yellow Brahma, green Vishnu, white Shiva and red Indra. From left to right across the top of the painting are the five tantric goddesses: Akash Yogini (Vidyadhari), Vajrayogini, Guhyeshvari Kali (centre), Khadga Yogini, and Khandaroha Dakini.
On either side of the painting are the eight wrathful manifestations of Bhairava, 'the terrible'. Each of these 'Eight Bhairava's' (astabhairava) are similar in appearance, except for their colours and specific consorts, who sit upon the left knee of each Bhairava and are collectively known as the 'Eight Mothers' (astamatrika).
From the top left downward these are: Khroda Bhairava with Vaishnavi (seated upon a garuda; Chanda Bhairava with Kaumari (peacock); Ruru Bhairava with Rudrani (white bull); and Asitanga Bhairava with Brahmani (white swan). And from the top right downward they are: Unmata Bhairava with Varahi (black buffalo); Kapala Bhairava with Indrani (white elephant); Bhisana Bhairava with Chamunda (human corpse); and Sanghara Bhairava with Mahalakshmi (white lion). Across the bottom of the painting, from left to right, are: six-armed red Kumara with his consort Kaumari; the ten-armed red aspect of Vajravarahi; and the ten-armed form of white Heramba Ganapati with his golden consort, Lakshmi.