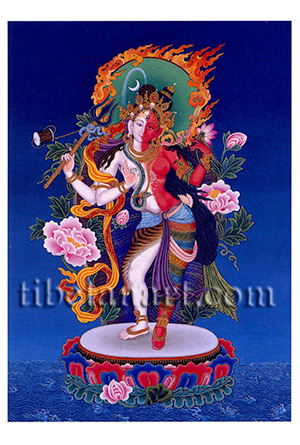 MINIMUM ORDER OF SEVEN 6" x 4" MIXED POSTCARDS PLEASE! Ardhanarishvara, 'the Lord who is half-woman', is a representation of the great Hindu god Shiva (Mahadeva), who is united with his consort or shakti, Parvati (Umadevi), in one body. The right half of Ardhanarishvara's body depicts Shiva's white male form, as he holds aloft his attributes of a trident and damaru with one hand, and a small egg-shaped stone lingam with his other hand. A five-day-old crescent moon adorns Shiva's crown, and the River Ganga spouts from the matted topknot on the crown of his head. His body is smeared with ash, and adorned with a tiger-skin loincloth, serpent necklace, a skull crown, and a third eye. The left half of Ardhanarishvara's body depicts Parvati's red female side with its one full breast. She is adorned with the divine silks and jewel attire of a goddess, and she holds a pink lotus in her raised left hand. The union of male (white) and female (red) within one body symbolises the merging of semen and menstrual blood to create life, and the alchemical transmutation or merging of the energies of the white lunar and red solar channels within the 'subtle body', which awakens the goddess Kundalini, causing the ascent of her blissful energies to 'enter, abide, and dissolve' within the subtle body's central channel.