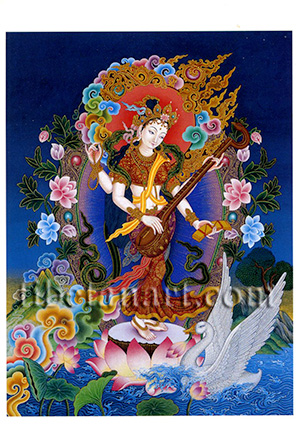 Sarasvati, meaning 'flowing water', is both a Hindu and Buddhist goddess of learning and knowledge, who is especially venerated within the arts of music, singing, poetry and speech. The Sarasvati was once a great Indian river that dried up long ago, but its invisible presence is identified with the median nerve or central channel (sushumna) of the 'subtle body', with its two subsidiary lunar and solar channels being identified with the Ganga and Yamuna Rivers. As a Hindu deity Sarasvati is a consort of both Brahma and Vishnu, and as a Buddhist goddess she is a consort of Manjushri - the bodhisattva of wisdom. Sarasvati's vehicle is a white swan, which appears here amidst the turbulent waters that support her lotus pedestal. With her first two hands she plays upon her vina or lute, while with her second pair of hands she holds a rosary, and a text on the Perfection of Wisdom (Prajnaparamita-sutra).