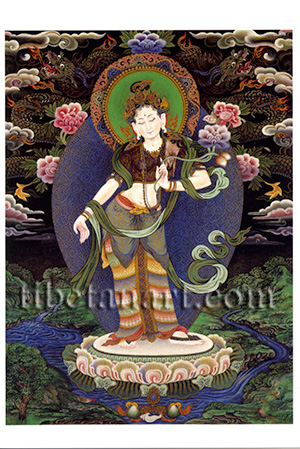 Above a lake, and upon a convoluted circular leaf, lotus and moon disc, stands the white bodhisattva of compassion, Lokeshvara - the 'Lord of the Worlds'. Lokeshvara (Avalokiteshvara) has a hundred and eight different manifestations in the Newar Buddhist tradition, and here he appears as white Padmapani - the 'Holder of the Lotus'. He is adorned in the five divine silk and eight jewelled ornaments; his lower robe is fashioned from rainbow-coloured silks, and across his left shoulder is draped his emblem of an antelope-skin. His right hand is extended palm-outward in the boon-granting varada-mudra, while his left hand holds the stem of a flowering lotus in front of his heart. Two auspicious dragons writhe in the upper clouds of the painting, while the foreground shows a tranquil landscape with an offering of the five sensory objects at the bottom centre.