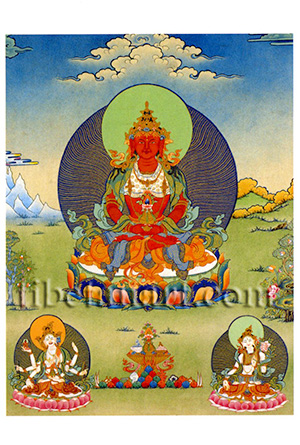 Amitayus (Tib. Tshe dpag-med), the red bodhisattva of 'Infinite Life', is depicted at the centre of this thangka, as he sits in vajra-posture upon a moon disc and a lotus. His hands rest upon his lap in the gesture of meditation as he holds a jewel-topped flask containing the nectar of immortal wisdom. In the lower left corner is the longevity goddess Ushnishavijaya (Tib. gTsug-tor rnam-rgyal-ma), the 'Victorious lady of the crown protuberance (Skt. ushnisha)'. She is white in colour, with three faces and eight arms. Her central face is white and slightly wrathful, her right face is yellow and peaceful, and her left face is blue and wrathful. With her first right hand she holds a crossed-vajra at the level of her heart, her second holds a lotus that bears a small image of red Amitabha Buddha, her third holds an arrow, and her fourth hand makes the gesture of generosity. With her first left hand she holds a rope-noose with her forefinger raised menacingly, her second is raised in the gesture of giving refuge or protection, her third holds a bow, and her fourth left hand rests upon her lap in the gesture of meditation as she holds a nectar-filled golden flask. In the lower right corner is White Tara (Tib. sGrol-dkar), who sits in vajra-posture upon a moon disc and lotus. Her right hand rests upon her knee in the varada-mudra of supreme generosity. Her left hand is held before her heart in the abhaya-mudra of the giving refuge as she holds the stem of an immaculate white lotus. She has seven eyes; the three in her face symbolizing the perfection of her body, speech and mind; and the four in her palms and soles symbolizing the 'four immeasurables' of loving kindness, compassion, sympathetic joy and equanimity. In the bottom centre is a golden bowl containing a longevity flask, a nectar-filled skull-cup full of the nectar, and a bowl of long-life pills. Below these offerings are stacked jewels and the seven insignia of the chakravartin. Thangkas of this trinity of deities are commonly commissioned to remove hindrances and illnesses, to prolong the life of a spiritual friend or relation, and to help provide an auspicious rebirth for someone who has died.