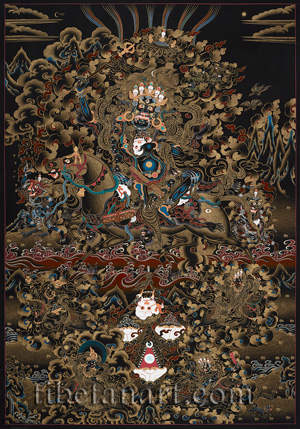 Palden Lhamo (dPal-ldan lha-mo), the 'Glorious Goddess', is the principal protective goddess of the Tibetan state, and she is depicted here in her form as Magzor Gyalmo (dMag-zor gyal-mo), the 'Queen who averts war or repulses armies'. The Sanskrit name of this 'glorious goddess' is Shri Devi or Remati. This gold on black thangka was painted by Chewang Dorje in 1996.

Magzor Gyalmo sits sidesaddle upon a wild mule with a white blaze upon its forehead, which she rides above a swirling ocean of blood and fat. She is blue-black in colour, with one face and two arms, and she abides amidst a maelstrom of dark green wind and fiery orange sparks. With her right hand she wields aloft a red sandalwood club with a vajra and a silk ribbon at its top. And with her left hand she holds the upturned skull of a 'misbegotten' child that was born from an incestuous union, which is filled with magical 'charm blood'. She is extremely wrathful, with an emaciated body, skeletal limbs, sagging breasts, and her skin is smeared with sesame oil and cremation ashes. She has three round red eyes, four sharp canine teeth, a twisting tongue, and upward blazing facial hair. A human corpse lies within her mouth, a roaring lion leaps from behind her right ear, and a fierce snake adorned with a bell appears behind her left ear. Her tawny hair-locks twist upward to the left above her five-skull crown, its central topknot bound by a serpent, and above her head floats a peacock-feathered parasol.

Magzor Gyalmo wears ornaments of gold and the five filigree bone ornaments. Upon her upper body she wears a bodice of black cloth, a long billowing silk scarf, and around her neck is a flayed human skin, with its arms, head and feet fluttering behind her body. Around her neck she also wears a long serpent as a sacred thread, and a garland of fifty severed heads. Around her waist she wears a 'hair petticoat', which usually appears as a tiger-skin loincloth that is bound with a belt of two entwined serpents. Her forehead, cheeks and chin are respectively smeared with cemetery ash, fresh blood and human fat; and around her ankles she wears iron fetters, the chained links of which she has broken.

Palden Lhamo possesses 'five magical weapons'. The first is a 'scored magical stick' or baton, which is tucked into her serpent girdle. Her second, third and fourth weapons are a 'skin sack full of contagious diseases', a pair of 'white and black spotted dice', and a 'bundle of red curses'. These three magical weapons hang from coiled serpents at the front of her saddle, while her fifth magical weapon, a 'ball of variegated thread', hangs from a serpent at the back of her saddle.

The saddle blanket of her mule is fashioned from the flayed skin of her own son, who was a rakshasa or 'flesh-eating demon', while the front and rear horns of her saddle are fashioned from the upper skull and jawbone of a rakshasa. The bridle and reins of her mule are fashioned from long poisonous serpents, and as ornaments her mule has a golden jewel on its forehead, a harness of bells around its neck, and the severed head of a rakshasa that hangs from a serpent. On the rump of the mule is an eye that gazes backwards, with the mule's three eyes representing the goddess's spontaneous ability to divine the activities of the 'three worlds' and the 'three times'.

At the front and rear of the mule are Palden Lhamo's two wrathful attendants or 'mental projections': Makaravakra (Chu-srin gdong-can), the dark-blue 'crocodile-headed' dakini, who holds a curved knife in her raised right hand as she leads the mule by its serpent reins with her left hand; and Simhavakra (Seng-ge'i gdong-can), the dark-red 'lion-headed' dakini, who guards the mule's rear holding a curved knife in her raised right hand, and a skull-cup full of blood in her left hand. Each of these naked and wrathful goddesses is adorned with bone ornaments and a human-skin shawl.

In the lower area of this painting are a group of four goddesses that surround Palden Lhamo at her front, rear and sides, who represent the 'four rites' (las-bzhi) or enlightened activities of Tantra; pacifying, enriching, subjugating, and forcefully liberating.

In the lower left corner (east) is white Shantidevi (Zhi-ba'i Lha-mo), who rides upon a white mule to the rear of Paldan Lhamo, wearing white garments to represent the activity of pacifying (zhi-ba). She holds a silver mirror in her raised right hand, and a silver medicinal container with a six-sectioned lid in her left hand.

Above (south) is yellow Pushthidevi (rGyas-pa'i Lha-mo), who rides upon a yellow mule at the left flank of Paldan Lhamo, wearing yellow garments to represent the activity of enriching (rgyas-pa). She holds a golden nectar vase in her raised right hand, and a golden bowl full of wish-granting gems in her left hand.

On the opposite side of the painting (west) is red Vashadevi (dBang-gi Lha-mo), who rides upon a red mule at the right flank of Paldan Lhamo, wearing red garments to represent the activity of overpowering or subjugating (dbang). She holds an iron hook in her right hand, and a rope snare in her left hand.

In the lower right corner (north) is black Abhicaradevi (Drag-po'i Lha-mo), who rides upon a black mule in front of Paldan Lhamo, wearing black garments to represent force or destructive activity (drag-po). She holds a rope snare and a mummified corpse in her right hand, and a scored magical tally-stick in her left hand.

In the lower central area of the painting are four skull offerings, the topmost being an upturned skull with its peeled scalp and hair attached. Inside this white skull are the torn-out offerings of the five sense organs; eyes, ears, nose, tongue and heart. Piercing the heart is an arrow with a black silk banner on its shaft, which represents the 'sixth-sense' of mental consciousness. Below are two skull-cups that are mounted upon a base of three severed heads, the skull on the left containing swirling nectar, and the skull on the right containing swirling blood. Collectively these three skulls represent the three conditions necessary for human conception to occur: fertile semen (nectar), fertile uterine blood, and the sense-consciousness of a being seeking rebirth. The bottom skull-cup contains a torma or 'sacrificial cake' offering to Paldan Lhamo, which is molded from dyed red, white and black barley-flour (tsampa) in the form of a fiery triangle.

The dark background landscape is filled with swirling clouds, flames and sharp rock formations, with rainbows, the sun, crescent moon and 'lucky constellation' in the sky above. A torrent of hailstones, lightning bolts and triangular meteorites rains down from the thunderclouds on the left, while two black wolves and vultures follow in the glorious goddess's train. These creatures represent the countless black birds, dogs, animals, women, and the multitude of black spirits that appear in the retinue of Paldan Lhamo.