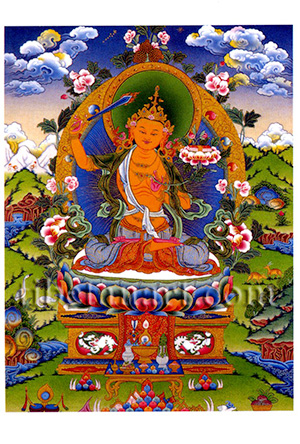 Manjushri is the bodhisattva of wisdom who embodies the discriminating awareness of all the Buddhas. He is golden-orange in colour and sits in vajra-posture upon a moon disc, a multicoloured lotus and a lion throne. He is as youthful as a sixteen-year-old, adorned with the five silk and eight jewel ornaments of a bodhisattva, and is described as having five topknots or hair-locks, which symbolically alludes to his sacred abode on the five-peaked mountain of Wutai Shan in China. With his raised right hand Manjushri wields a flaming sword of wisdom aloft, and with his left hand he holds the stem of a lotus that bears a text on the 'Perfection of Wisdom' or Prajnaparamita-sutra.