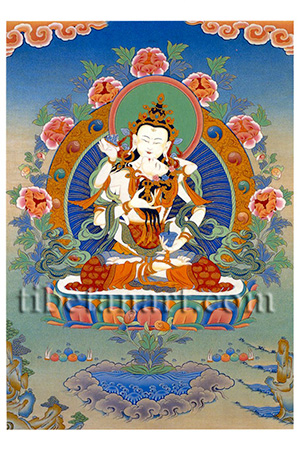 Vajrasattva (Tib: Dorje Sempa), meaning 'the vajra-hero', is a deity employed mainly in visualisation practices to purify the defilements of body, speech and mind. His hundred-syllable mantra is believed to be particularly effective in pacifying the emotional afflictions of anger and hatred. In the Tibetan Nyingma tradition Vajrasattva is recognised as the Adi Buddha or source of transmission for the Dzogchen teachings, and he is accorded the central position in the 'mandala of the forty-two peaceful deities'. Vajrasattva is white in colour and is depicted here in sexual union with his white consort Vajragarvi (Tib: Dorje Nyenma-karmo), who embraces her lord with her right hand holding a curved knife behind his neck, and her left hand holding aloft a nectar-filled skull-cup.
Vajrasattva sits upon a white moon disc and a multicoloured lotus. He is beautiful and as youthful as a sixteen-year-old, adorned with the thirty-two major and eighty minor marks, and attired in the five silk garments and eight jewelled ornaments of a bodhisattva. He holds a golden five-pointed vajra before his heart with his right hand, while his left hand holds a ritual bell at the level of his hip. The attributes of a vajra and bell symbolises the perfect union of his skilful means and wisdom.