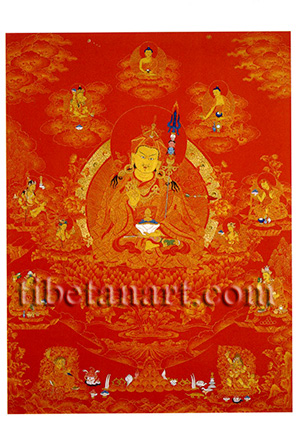 At the centre of this gold on vermilion thangka is the 'Lotus-born' Guru, Padmakara or Padmasambhava (Tib. Padma-'byung-gnas), who is flanked on the left by his Tibetan consort Yeshe Tsogyal, and on the right by his Indian consort Mandarava. At the top centre is Amitabha Buddha, and then circling clockwise are Padmasambhava's eight manifestations: 1. Shakya Senge (The Lion of the Shakyas): 2. Padmasambhava (The Lotus Born): 3. Padma Gyalpo (The Lotus King): 4. Senge Dradrog (The Lion's Roar): 5. Dorje Drolo (The Pot-bellied Vajra): 6. Loden Chogsay (The Supremely Intelligent): 7. Nyima Odzer (Light Rays of the Sun); 8. Urgyan Dorje Chang (The Vajra-Holder of Urgyan). These eight manifestations are the forms that Padmasambhava assumed during various episodes of his life.