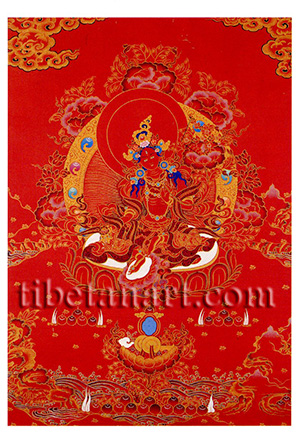 This thangkha of Red Tara is painted in gold line with minimal colour highlights upon a vermilion background. This Tibetan aspect of Red Tara is known as Rigje Lhamo, meaning 'the fully-accomplished goddess', and her practice was widely transmitted by the late Chagdud Rinpoche, whose main centres are located in California and Brazil.
Red Tara is a peaceful emanation of the powerful red subjugating goddess, Kurukulla. She sits in the posture of 'royal ease' upon a moon disc and a red lotus, with her extended right foot resting upon the pedestal of a smaller moon disc and lotus. She is enchantingly beautiful, adorned with flowers, and wears the five silk garments and eight jewelled ornaments of a goddess. Her right hand is extended downwards to rest upon her knee in the varada-mudra of supreme generosity, as she holds a lotus-topped longevity-vase filled with the nectar of immortal wisdom. Her left hand is held before her heart in the gesture of giving refuge, with her thumb and third finger holding the stem of a large red lotus flower. This lotus blossoms at the level of her left ear and bears the attributes of a small drawn bow and arrow that are fashioned from red lotus flowers. Placed before her are an offering of the five senses, jewels and elephant tusks, and the seven emblems of a chakravartins or 'universal monarch'.