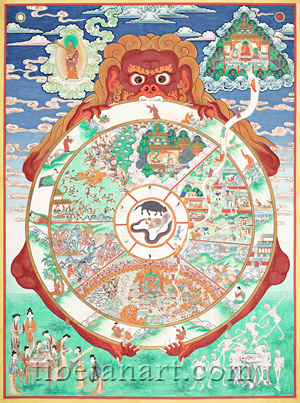 This Wheel of Life thangka was probably painted in Eastern or Central Tibet in the late 19th or early 20th century, and is perhaps one of the most complete renditions of this didactic composition that have ever been painted, particularly in its accurate depiction of the six realms of cyclic existence.

In the central hub of the wheel are a pig, a cockerel and a snake, which represent the three primary defilements of ignorance, desire and aversion. These three creatures chase and bite each other's tails, indicating how primordial ignorance gives rise to desire and to aversion, which then give rise to endless and self-perpetuating cycles of delusion, craving and hostility. In the second circle are five naked human forms and a buffalo, which represent beings in the 'intermediate state' (bardo) that rise and fall as they take rebirth into one of the six realms.

The environments, characteristics and sufferings of these six realms are graphically depicted in the wide third circle of the painting: with the three 'higher realms' of combined jealous-gods or asuras (left) and gods or devas (top), and the human realm (right), appearing in the wheel's upper half. And the three 'lower realms' of the hungry ghosts or pretas (left), hell realms (bottom), and animal realm (right) in the lower half of the wheel.

In the outer ring of the wheel are symbolic representations that illustrate the Buddhist doctrine of the 'twelve links of dependent origination', which represent how karmic propensities, emotional defilements and conditions create an endless chain that propels beings to revolve through continuous cycles of birth, death and rebirth within the six realms of samsara or cyclic existence.

Clockwise from the top, these twelve links illustrate: a blind man (primordial ignorance); a potter (habitual karmic propensities); a playful monkey (consciousness); five men in a boat (five aggregates of name and form); an empty house with five windows and a door (five sensory organs and mental sense); kissing (contact); blinded by an arrow in one eye (feelings of pleasure, pain and indifference); drinking alcohol (craving); a man picking fruit (grasping); a pregnant woman (becoming); childbirth (birth); an old man and a corpse being carried (aging and death).

The entire 'Wheel of Life or Existence' (bhavachakra) is grasped in the claws of a wrathful red demon (mara) that devours the wheel with his sharp teeth to symbolize the ultimate impermanence or temporality of all cyclic existence. In the upper left corner of the painting is Shakyamuni Buddha, who stands outside the wheel and points towards a full moon, symbolizing the path to enlightenment that will lead to complete liberation from samsara. In the upper right corner appears the Pure Land of Sukhavati, which is presided over Amitabha Buddha and his two attendant bodhisattvas. A white pathway leads from beneath the skull-walled 'judgment court of Yama' in the hell realm to Amitabha's heavenly paradise, upon which ascend those fortunate monks and devotees that follow the practices of the Pure Land tradition.

In the lower left corner of the painting are a group of nine noblewomen in Chinese attire, who pass their time in refined pursuits such as playing the game of Go, reading, poetry, calligraphy, painting, etc. And in the lower right corner their nine skeletons illustrate the ultimate outcome of such cultured indulgences, for procrastination really is the thief of time.