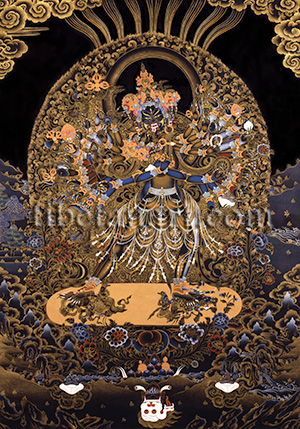 Kalachakra (Tib. Du-kyi khor-lo), the "Wheel of Time", is an important yidam or meditational deity of the Highest Yoga Tantra (Skt. anuttarayogatantra) class of deities, with a highly esoteric and symbolic tantric system. Initiation into the teachings and practices of Kalachakra have now been widely disseminated by H.H. The Dalai Lama and several other prominent Tibetan lineage holders of this unique tradition. The Kalachakra system differs from other Tantras in its symbolism and colour placements, which owes much to Hindu terminology and the alternative cosmology of its complex 634 or 722 deity mandala (see below). This gold-on-black composition by Chewang Dorje is an accurate copy of an unusual 19th century thangka of Kalachakra and his consort Vishvamata, in that both deities are depicted with wrathful expressions.

Kalachakra's body is blue-black in colour, with four three-eyed faces, three necks, twenty-four arms, and two legs. His main central face is black, with a very fierce expression, bared teeth and fangs, and yellow upward-blazing facial hair. His right face is red with a passionate but wrathful expression. His left face is white with a peaceful yet fierce expression. And his rear face is yellow with a meditative semi-wrathful expression of samadhi. His central neck is blue-back, his right neck red, and his left neck white. Each of his faces is adorned with a five-jewel crown and ornaments of filigree bone, with a small kirtimukha or 'face of glory' and an eight faceted gem crowning his central face. His tawny hair is bound up into two topknots, which are crowned with a wish-granting gem.

He has six shoulders; the two upper ones are blue, the two middle ones are red, and the two lower ones are white. From these six shoulders emanate twelve upper arms and twenty-four forearms, eight of which are black, eight are red, and eight are white. Traditionally the backs of the fingers on each of his twenty-four hands are coloured: yellow (thumb), white (forefinger), red (second finger), black (third finger), and green (little finger): while the three inner joints of each finger are coloured black, red and white from their palms outward. However, here the backs of each of his fingers are coloured in sections of blue (black), red, yellow, green, and white.

Kalachakra stands in alidha posture as he leans towards the left. His right leg is red and extended, while his left leg is white and slightly bent. His right foot presses on the heart of red Kamadeva, the Vedic god of love, who holds five flower arrows, a bow, a hook, and a noose in his four arms. At Kamadeva's side is his red consort Rati, who desperately tries to lift Kalachakra's foot from the breast of her lord. Kalachakra's left foot tramples upon the heart of three-eyed white Rudra-Shiva, who holds a trident, a damaru, a skull-cup, and a khatvanga in his four arms. At Rudra's side is his white consort Gauri (Rudrani or Parvati), who likewise tries desperately to lift Kalachakra's foot from the heart of her lord. The disc upon which Kalachakra stands is traditionally made up of the four stacked planets: Kalagni (golden), Rahu (blue-black), Sun (red), and Moon (white), which rest upon the pericarp of a vast multicolored lotus. However, here only the golden Kalagni disc is shown.

Kalachakra's consort is Vishvamata, the 'All-pervading Mother', who stands in pratyalidha posture as she presses every part of her body against her lord Kalachakra in sexual union. She is golden-yellow in colour, with four faces, two legs, and eight arms. Her four fierce faces all have three eyes, and are coloured yellow (centre), white (right), red (left), and blue (back). Her hair is bound up into a topknot and she wears the golden ornaments of five-jeweled crown, earrings, and bracelets, armlets and anklets. She is also adorned with the five bone ornaments, with her elaborate bone belt and apron bearing multiple loops of both bone and gold ornaments. With her first left hand she embraces the necks of her lord as she holds a skull-cup full of blood behind his heads. With her other three extended left hands she holds a rope-noose, a blue lotus, and a blazing eight-faceted jewel. And with her four right hands she holds a vajra-handled curved-knife, a vajra-hook, a damaru, and a rosary of skulls.

Kalachakra's inner aura is decorated with swirling roundels of entwined vine-like patterns, while his outer aura manifests as a golden mass of swirling wind and fire. A spray of flowers ascends from either side of his golden Kalagni disc, with two other sprays of flowers emerging from below his lotus-throne. Jewel offerings, golden vases and paired elephant tusks emerge from the water below. In the lower foreground is a central upturned skull bearing the five torn-out sense organs of a heart, eyes, ears, a nose and a tongue; and on either side are two cloud-borne skull-cups containing swirling blue nectar and red blood.

Images of Kalachakra's two-dimensional painted and 'sand mandala' are now well-known in the West because of the many Kalachakra initiations that His Holiness The Dalai Lama has bestowed worldwide, although less is understood about Kalachakra's three-dimensional mandala. This triple storey palace of 'body, speech, and mind' (Skt. kaya-vak-citta) houses 634 resident deities, although an alternative number of 722 deities is often given. A total of 70 deities reside in the upper mind mandala, 116 in the middle speech mandala, and 536 in the lower body mandala, which collectively give a total of 722. But 88 of these body mandala deities reside in the ten charnel grounds outside the triple-mandala palace's walls, which then gives a total of 634 resident deities.