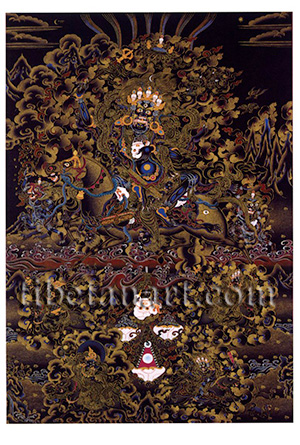 Palden Lhamo (dPal-ldan lha-mo), the 'Glorious Goddess', is the main protective goddess of the Tibetan state, and she is depicted here in her form as Magzor Gyalmo - the 'Queen who repulses armies'. She rides her mule across a swirling ocean of blood and fat, amidst a dark maelstrom of wind and fiery sparks. She is blue-black in colour, with one face and two arms. With her right hand she wields aloft a vajra-topped red sandalwood club, and with her left hand she holds the upturned skull of a 'misbegotten child' in front of her heart, its cranial cavity filled with magical 'charm blood'. She is adorned with black silks, a flayed human skin, a hair loincloth, and both jewel and bone ornaments. She wears broken chains around her ankles, a crown of five dry white skulls, a long garland of fifty freshly severed heads, a serpent necklace and belt, and her forehead, cheeks and chin are smeared respectively with human ash, blood and fat. She has three round red eyes, four sharp canine teeth, and her tawny hair streams upward like fire. A human corpse lies within her mouth, a roaring lion leaps from behind her right ear, and a poisonous snake darts from behind her left ear. She has a protruding stomach, sagging breasts, and thin limbs. The sun blazes from her navel, the crescent moon adorns her crown, and a canopy of peacock feathers floats above her head. A gale emanates from the crown of her head, and upon this wind ride the four 'Queens of the Four Seasons', each of which rides upon a different animal, holding skull-cups of blood in their left hands and different weapons in their right hands.
Palden Lhamo possesses five magical weapons: a tally-stick scored with curses that is tucked into her serpent waistband; a pair of divination dice; a skin sack full of contagious diseases and a bundle of red curses, which hang upon serpents from the front of her saddle, and a ball of variegated thread that hangs from the rear of her saddle. Her saddle is fashioned from a cannibal's skin, with a demon's upper skull at the front and its jawbone at the rear. The bridle and reins of the mule are fashioned from poisonous serpents, and the three eyes of her mule gaze over the past, present, and future. At the front and rear of the mule are Palden Lhamo's two attendants: Makaravakra, the blue 'crocodile-headed' dakini who leads the mule by its snake reins; and Simhavakra, the red 'lion-headed' dakini who guards the mule's rear.
In the lower foreground are skull offerings of the five sense organs (top), blood and nectar (centre), and a torma or 'sacrificial cake' (bottom). In the bottom corners are the four goddesses who accompany and flank Palden Lhamo in each of the four directions. In the lower left corner and riding upon a white mule is Zhi-ba'i Lha-mo, the 'pacifying' white goddess of the rear flank, who holds a silver mirror and a silver medicinal casket. Above her and riding upon a yellow mule is rGyas-pa'i lha-mo, the 'enriching' yellow goddess of the right flank, who holds a golden flask of nectar and a golden tray of wish-granting jewels. In the lower right corner and riding upon a black mule is Drag-po'i Lha-mo, the 'destructive' black goddess of the front flank, who holds together a mummified corpse and a rope snare, and a tally-stick scored with curses. Above her and upon a red mule is dBang-gi Lha-mo, the 'subjugating' red goddess of the left flank, who holds an iron hook and a rope snare. The turbulent landscape depicts swirling oceans of blood, clouds, lightning, hail, and sharp rocky peaks. Countless black spirits, black birds, black dogs, black animals and black women follow in the retinue of Paldan Lhamo.