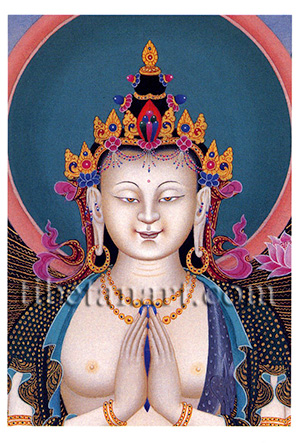 This detail of a painting by Ajay Lama shows the face of Sadaksari Avalokiteshvara, the four-armed bodhisattva of great compassion. His two principal hands are palms-folded in anjali-mudra as he clasps a wish-fulfilling blue gem in front of his heart, while with his other two right and left hands he hold a rosary and a lotus (unseen). The green skin of a deer or antelope is draped across his left shoulder, and he smiles sweetly as he gazes upon all beings with his two compassionate eyes. Half of his hair is piled up into two topknots, while the other half hangs freely behind his back. The top of his head is adorned with a golden wish-granting gem, and two jewel-tipped hair ornaments adorn his two topknots. He wears a jewelled golden crown that is fastened with a billowing silk ribbon, and adorned with little hanging loops of pearls and small jewels, and he wears golden earrings, necklaces, bracelets and armlet. The golden lines that emanate within his dark blue aura symbolize the light rays of his wisdom and compassion, and the green colour of his halo represents the element of air.